The French National Institute for Agricultural Research (INRA) used its booth at the 55th Salon International de l’Agriculture in Paris to tell visitors about some of the challenges to conserving and sustainably using forest genetic resources. In addition to samples of tree seed diversity, the booth also showed a video produced by GenTree explaining why forest diversity matters in the face of climate change. Scientists, professionals in agriculture and forestry and the general public visited the show between 24 February and 4 March, 2018.

Events like the Salon give people a chance to learn about ideas like “genetic resources,” which are often poorly understood.

Forest genetic resources (FGR) encompass the genetic diversity among different individual trees and among populations of a tree species across different ecosystems. Without genetic diversity, forests cannot adapt to environmental changes, one reason why conservation and sustainable use of FGR is of concern across Europe.

At the same time, the demands of society are changing. The benefits we expect from forests and trees are different now than they were: wood, biomass, recreation, health—the list goes on. Rapidly changing climate means that forests and tree plantations with multiple uses face new constraints and must be able to adapt.

For more than 50 years, the collections of INRA and its partners have incorporated a large part of the diversity of cultivated species and their related wild, animal and microbial species. The collections constitute an important scientific resource that helps researchers to breed new plant varieties adapted to new needs, to improve livestock breeds and to enhance chemical processes for food production, such as fermentation.

Part of the diversity related to tree species was displayed at the INRA booth.

“When we showed people seeds collected from different trees in a single stand of Scots pine, they were amazed at how different the seeds were. Colour ranges from light brown to black and some are double the size of others, and all of this diversity from trees of the same species in the same forest” said Dr Brigitte Musch, a forest service scientist from the joint INRA–Forest Service lab BioForA in Orléans.

Musch was one of the scientists who engaged with visitors to the stand.

“We talked to people about rapid changes in climate and how that might mean we have to move different genotypes and even different species to match the climate we anticipate at a given location,” she said. “They understood the issues at stake. And because they had a chance to see the differences between individuals of the same species, they could appreciate the connection that these differences might have with adaptive traits.” 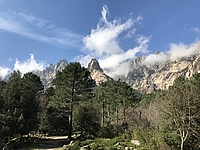