The GenTree project funded under the EU Horizon2020 scheme started in March 2016 and officially kicked off at a meeting held at INRA, Domaine Saint-Paul, Avignon, France from 20 to 22 April 2016. It gathered 52 participants from 22 partner institutions. The meeting enabled partners to revisit the project's goals and objectives, and to get organized to implement the activities planned.

One of the main challenges that emerged is how to organize the sampling for DNA analyses in a way that will be meaningful to tackle the key scientific questions the project is addressing:

How is selection shaping the evolution of phenotypes at small and large spatial scales, across the lifespan of a tree?

Providing a statistically sound experimental design with replicates to test these hypotheses is far from trivial. The task is further complicated by the fact that the project is investigating as many as 12 tree species, both conifers and broadleaves, of which seven are analyzed more in depth with regard to selection processes affecting genomic diversity. These seven main species will be sampled across a variety of sites along environmental gradients, across several countries. Sampling will extend beyond collecting for genetic analyses and will include a set of additional parameters that will further characterize the sites and the tree individuals sampled. In particular, sampling will include phenotyping of key fitness-related functional traits at different stages of tree development (adults, juveniles and seedlings). The definition of a minimum set of phenotypic traits to be consistently sampled across sites was largely discussed. Despite the complexity of the project, partners are successfully producing an ecologically and evolutionarily meaningful sampling design and strategy that will be finalized just before the summer when sampling will begin.

The extensive field work to be carried out within a relatively short window of time across several countries, adds complexity to the coordination of the large sampling effort. GenTree has the objective of contributing to the characterization of the European in-situ conservation network of forest genetic resources, using genomic markers, phenotypic traits and demographic parameters, particularly focusing on range and ecological margins of species distribution, and on underexplored regions. Therefore, some sampling sites need to coincide with gene conservation units identified in Europe (see definition), introducing additional constraints to the sampling design.

At the administrative level, another challenge is posed by the need to comply with the Nagoya protocol for the movement across countries of samples from which DNA will be extracted. The Nagoya protocol on access to genetic resources and fair and equitable sharing of benefits arising from their utilization is a supplementary agreement to the Convention on Biological Diversity. The protocol requires Parties to implement appropriate administrative measures to allow access to their genetic resources. Accessing and utilizing genetic resources means conducting research and development on the genetic and/or biochemical composition of genetic resources, including through the application of biotechnology. Material transfer agreements will have to be developed between the origin country and recipient country where the laboratory analyses will be conducted.

The involvement of stakeholders is a very prominent activity in GenTree. Though the themes investigated by the project are difficult to communicate to a non-technical audience and to the general public, the project will contribute to raising awareness of the relevance of forest genetic resources in sustaining forests and the forestry sector in Europe. The project will generate innovative forest management and tree breeding options and it will seek engagement of stakeholders by soliciting their inputs early in the project through the organization of consultations, such surveys and workshops, and by transferring knowledge through training sessions and conferences. 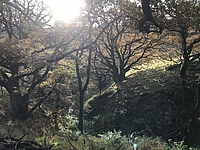