Many phenotypic traits, like growth, are known to be driven by more than one gene. For example, it has been shown that the height of humans is associated to thousands of regions in the genome. It is therefore likely that genetic adaptation to local environmental conditions, which is one of the main topics investigated in the project GenTree, is mostly "polygenic" rather than influenced by single genes with large effect. Approaches to detect such polygenic signals from genomic data, however, are still scarce and rarely applied. Scientists screening the genome to find signatures of local adaptation have therefore mostly used single-locus approaches, where interactions among genes tend to be neglected.

The summer school did not only include science. On Tuesday evening, the participants visited a winery near the lake of Zürich. The beautiful summer evening was ideal to recover from the intense lectures and exercises, interact with people from similar research fields, enjoy a nice meal under the sky, or learn about different grapes and wines directly from the local host. The summer school was followed by a two-day symposium on the same topic at the University of Zürich that many participants of the summer school attended.

See more pictures from the summer school
Back 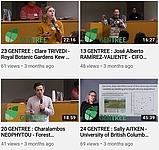